Dovetail jigs are among the most specialist ‘tools’ around. After all, if you are not cutting dovetails regularly, then they are probably not going to be of much use to you. If you are cutting dovetails ‘one off’ then you should probably be fine making up your own dovetail jig. However, if you want guaranteed accuracy time and time again, then there is no better route to go down.

Dovetail jigs are 100% dedicated to allowing you to cut dovetail joints for your woodworking. They are commonly used in most carpentry and furniture making. The best dovetail jigs on the market will allow you to cut the most common ‘dovetails’. This includes tails, pins, standard, and half-blind.

While you can, in theory, make your own dovetail jig, most people go down the actual jig route because it is far, far easier to mix it up with other routing jigs that you may be using. Most of the jigs that you see on this list can be used either manually or with a router. Although, of course, if you want to make things easy for yourself then you will use it in combination with a router and the correct router bit (we will not cover the selecting of router bits on this page.

Most of the dovetail joints should comer with a standard one, but if you are doing a lot of routing, it won’t last long) As always, we will review these products based on their overall quality, as well as how well they have been designed. 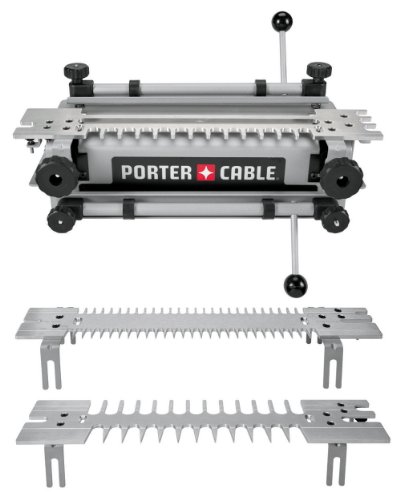 Let’s start with this offering from Porter-Cable. This is what you have included in the box:

Basically, you have a lot of options at your disposal here for not a whole lot of money. One of the reasons why I selected this Porter-Cable offering is because of how robustly it has been built. While I have only, personally, been using nine for a few months, there are plenty of people out there who have been using theirs for a good couple of years.

It is also ridiculously easy to set it up. Once you have the template locked onto the routing jig, it is not going to move about at all. This guarantees accurate cuts each and every time. For reference, this product can accommodate wood stock from 1⁄4” to 1 1/8” thick.

This should cover you for jus about every single eventuality. You get a 3-year warranty included with this dovetail jig. 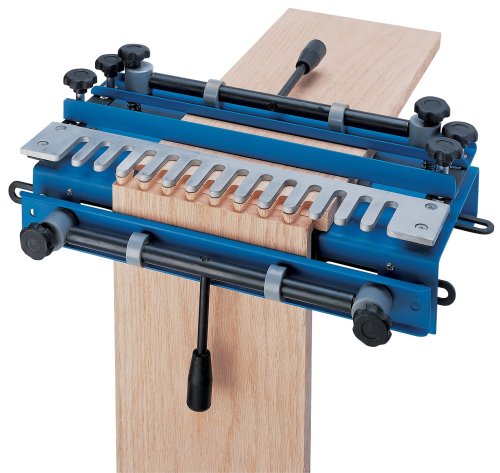 The big problem that I have with the Woodstock dovetail jig is that most people out there will dismiss it. The main reason for this is that Woodstock are hardly one of the biggest brand names in the world when it comes to routing. In fact, I had never even heard of them before I had it in my hands to review.

I am not going to lie to you; if you are searching for something which is going to turn heads and put up with a lot of use day-in, day-out then you will probably want to search elsewhere. While I have no doubts that the Woodstock is going to be able to put up with use in a professional environment, there are better routing jigs on the market which play well with other routing systems.

It is good, but your money may be better spent elsewhere. If you are a light user, or even a DIY user, that wants a quick and cheap way to cut accurate dovetails, then this may be the route to go down. It is worth noting that unlike the previous dovetail jig, you are only going to get a single template In here.

This is a 1⁄2 -inch half-blind dovetail joint. It is the most popular type of dovetail joint but, as I am sure you can see, the single template really does lower the utility of this product. While it is easy to set-up, you are only going to get the basics in this box.

You do not get your guide bushing, of which you need a 7/16” one for your router or your router bit. While neither are terribly difficult to get your hands on, mainly because both can be picked up from Amazon, it is a bit of extra hassle.

I am actually surprised at how accurate it is too. I cut a fair number of joints with this, and for the price what it brings to the table really can’t be beat. 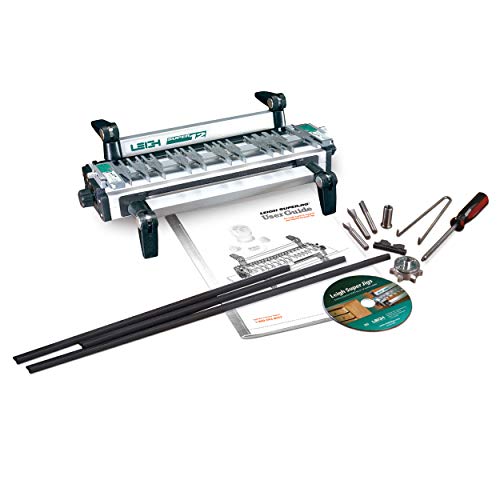 Probably the most expensive jig on this list thus far. However, I can promise you that the Leigh jig justifies each and every penny that it asks for. There is a reason why these are among the most popular routing jigs in the United Kingdom and most of Europe.

The reason why I am recommending the Leigh 12” Dovetail Jig so highly is because it is so adjustable. If you look at the other dovetail jigs that I highlight on this list, then you will notice that they have various templates. Honestly, I thought that this was the best way to go until I got my hands on the Leigh.

With the Leigh, you don’t have templates. Instead, you can adjust the ‘fingers’ on the template however you please. It has nigh on infinite possibilities when it comes to your dovetails. This means that it can do whatever you want without the hassle of constantly switching between templates, which can be a bit cumbersome if you are doing it several times per day.

You would think that it is tough to set up the Leigh however you want too. It is not. Once you learn the ropes of the jig, then you can set it up however you please quite quickly. I admit, it will take a bit of time for you to learn the ropes, but that should be fine.

This is a professional piece of kit that always produces accurate joints, so you should have no complaints there! The best part is, well, the second best part as the infinite capabilities can’t be ignored, is the fact that it can accept some larger pieces of wood too. In fact, its maximum capability is 12”.

This is one of the highest amounts on the market. If this was not enough, this jig has been so robustly built that you will never need to worry about breaking it. I mean, I have seen Leigh units used for years and I don’t think I have heard a single complaint about it breaking on somebody. 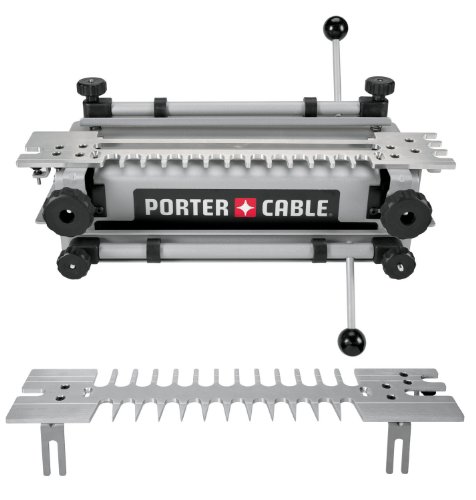 Yep. Another Dovetail jig from Porter-Cable. However, this is a company that makes some of the best dovetail jigs, or routing jigs in general, on the market so I have absolutely no qualms about including them twice. In fact, it would be wrong for me not to include them twice, because it would mean that my readers would be missing out on something which is of high quality.

The kit is not as comprehensive as the first Porter-Cable dovetail jig that was discussed. You do not get the miniature dovetail cutters, for instance. However, honestly, I doubt that many of the people reading this page are going to be after that anyway.

Instead, you get two dovetail templates which allow you to cut dovetails for box joints, half-blind dovetails and a whole lot more. Once again, I do want to pick up on the fact that this is a unit which is incredibly well-built. It comes with a solid steel base so you do not have to worry about it sliding about too much.

Once you have the template locked into position, then you can be positive that it is going to stay there until you say otherwise. This ensures accurate cuts each and every time. If you have never used a dovetail jig before, then I always recommend that you look up guides online beforehand. They can be a little bit confusing to understand.

However, I am pleased to say that even if you can’t do the research online before you dive into it, the Porter-Cable dovetail jig comes with a comprehensive user guide. Even if this is your first time using a dovetail jig, you will not be lost at all when it comes to what to do. 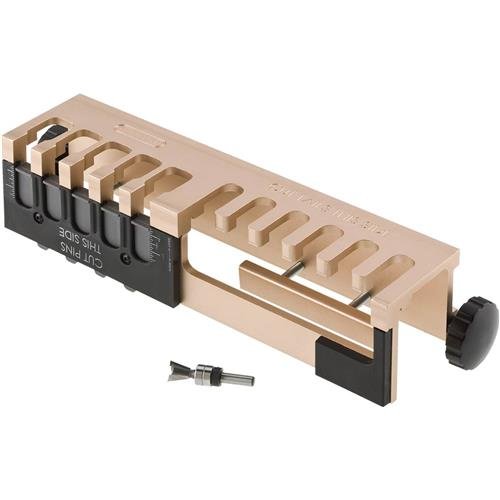 If you are looking for a dovetail jig to use regularly in a professional environment, then you probably are going to want to look elsewhere. This is not it.

The General Tools Pro Dovetailer is a lightweight unit for those who may be cutting dovetails on occasion. It is not going to be winning any awards from a design perspective. It is more for somebody that wants something basic, affordable, and yet still delivers quality.

This is cheap. If you are expecting something that will blow your mind then this is not it. The General Tools dovetail jig is more there for when you need to quickly cut a dovetail without messing about. You don’t have a lot of options. It cuts a basic dovetail.

However, it has minimal set-up time and it is quite durable. As I mentioned before, if you are cutting a ton of dovetails every day, look elsewhere. I was intrigued as to how accurate this dovetail jig is. I made several hundred cuts, and it was always accurate, so absolutely no fault with it there. It was surprisingly stable during use too, something which most of the cheaper dovetail jigs on the market aren’t.

I can’t say much for the warranty, because there are no details on that, but I doubt you would ever be claiming on the warranty for something this cheap anyway.