There are many tools that both a home mechanic and a professional need, but there is one that is so essential, it is impossible to even think of a person as a mechanic if he does not have it, and that is the ratchet set.

Long time mechanics will often have 3 or even 4 sets and each one will have an intended purpose, including the set that they are willing to lend out to friends and the set that they only use when working on their own cars or cars that are worthy of it. It may not seem so but there are incredibly well thought out reasons behind their madness and they all have to do with the fact that not all ratchet sets are created equal.

Some of them have incredibly complex gear systems that are designed to make the job of the mechanic easier and that can outlast that mechanic’s career, while others are created to cost very little, to be used for a couple of years so that mechanic can get the biggest bang for his buck in a very short period of time, and then invest in a better set.

Needless to say, in our search for the best ratchet set on the market, we stayed away from the sets that are so cheap that, right of the box, you will not be able to use them more than a couple of times, but we did take into consideration those sets that we knew would only last for a couple of years.

You should definitely check out our most expensive ratchet set too, because, even though it is a little bit more than anything else we have been looking at, it is also a set that is so complex and so sturdy that you will enjoy it for many years to come.

Best Ratchet Set If Money Is Not a Problem 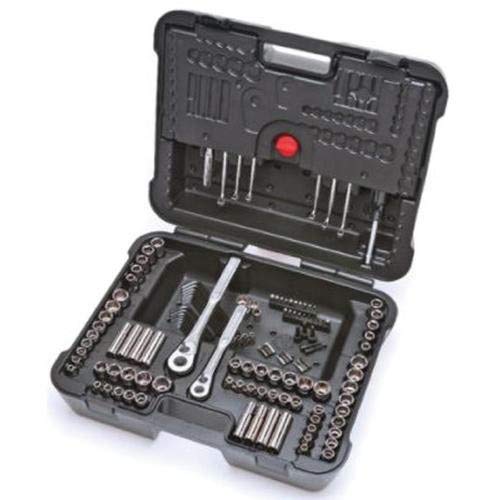 If there is one thing that tells us we are dealing with a good quality ratchet set, from the first moment we open the tool case, is to see a lot of relatively small pieces that can be combined in different ways to have different types of tools.

Our top choice ratchet set if money is not a problem is the Craftsman 220 pc. Mechanics Tool Set with Case and the moment you open the box you can see that the screw drivers heads themselves are set apart which immediately tells you that you will have the possibility to mount them up on various tools to apply different levels of pressure and from different angles.

The important thing to note is that you have 128 sockets in both metric and standard sizes so you will have no problem working on a European or a Japanese import car. What is even more important is the fact that the important sockets also come in a deep well version, besides the standard, so you easily go about changing the spark plugs or undoing some of the more difficult screws on your car.

You have a further 41 screw driver and nut driver bits that can be setup to fit anyone of the 3 quick release ratchets and the 6 wretches.

Finally, the Craftsman 220 pc. Mechanics Tool Set with Case comes with a lifetime warranty on craftsmanship so they will cover any defects that may appear even a decade after you buy the set. 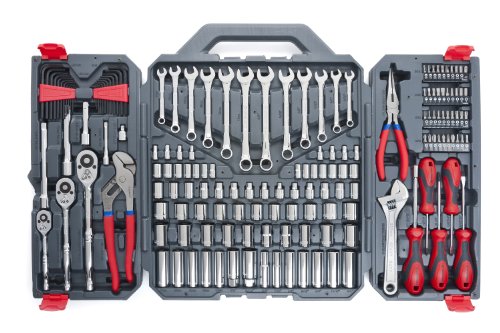 When you are judging the price of a ratchet set, you need to look at the quality of the pieces in that set but you also need to take a close look at the number of pieces. More ratchet sets seem to look similar because they are all going to have a relatively big number of sockets, and at least a couple of ratchets.

However, the devil is in the details, and, if you take another look at the Craftsman that is our number one choice you will see it contains more pieces than any other ratchet set. However, if you absolutely need to keep the price down, you could go with our best ratchet set for the money, which is the Crescent CTK170CMP2 Mechanics Tool Set.

It only has 170 pieces, but those are the essentials that are going to turn that basement room into a real garage. This is a great time to buy the Crescent CTK170CMP2 Mechanics Tool Set because they have just finished a major upgrade in their manufacturing process and both the sockets and the screwdrivers are made through a new manufacturing system that creates much stronger, sturdier pieces.

The set includes both regular and those metric sockets that are essential for European cars. Everything comes in a very sturdy case so you will be able to keep your garage as cleans as possible, as long as you take the time to put everything back in its place once the work is done.

Best Ratchet Set on a Budget 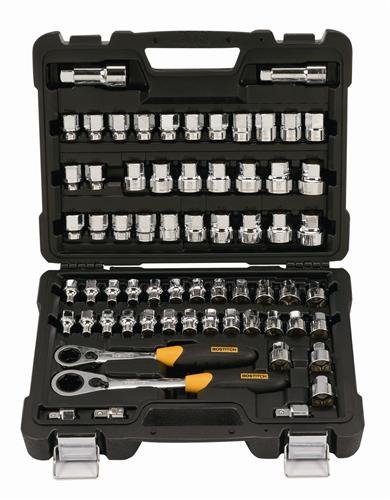 We mentioned earlier that all ratchet sets tend to look the same to the uninitiated because they contain a couple of ratchets and the obvious, shining sockets. However that is precisely the case about the Bostitch BTMT72287 Pass Through Socket Set, which is our budget set.

There are a couple of things that are quite impressive about the way it was manufactured but, before we get into that, let us just warn you that this is by no means the one ratchet set that will get you through a complete job. You need at least a second screwdriver set, and several pliers before you even start to think about approaching a car.

The ratchet set uses rubber grips which are extremely comfortable, but the one thing that we need to point out is that you will not be able to use a hammer to persuade the more suborned screws on the car to come undone.

Ultimately though, the thing to remember is that, as well built the Bostitch BTMT72287 Pass Through Socket Set might be, it still only has 65 pieces, and you will need another set of tools for some of the jobs. 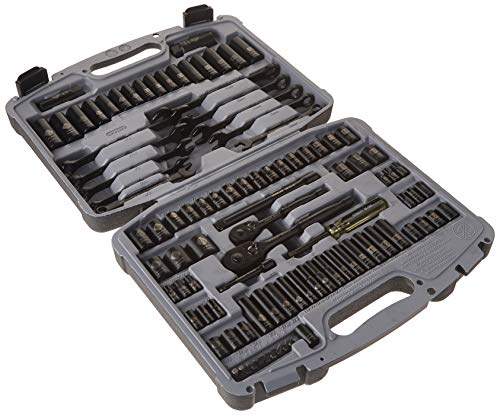 There is one other ratchet set that we liked very much for the best on a budget category, but, when you are keeping an eye on that bottom line, every little bit matters, and that is why we eventually went with the Bostitch.

However, our runner up, the Stanley 92-839 Black Chrome Socket Set does merit a mention here because it is a much richer set at 99 pieces, and it does have those wrenches that can reach in places where a socket will never be able to go, even if we are talking about the low profile one.

You also get a screwdriver set, so this would be a much more complete ratchet set in terms of what it can do. And what is even more impressive is the fact that Stanley have their own Max Drive design which they advertise as providing a 15% increase in power.

We did try it out ourselves and we did feel an obvious increase in the power we could exert, but we did not do any measurements to determine if it is more or less than the 15% Stanley promises. 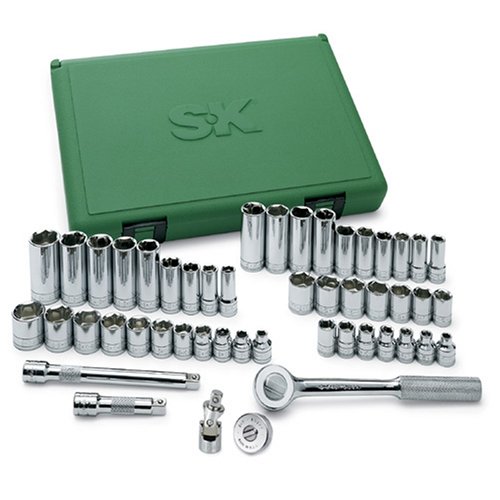 Although most of the socket sets we have introduced today do have some metric sockets, it can be quite difficult to find a complete metric socket set and there are some situations where you will not be able to do your job without it. So we decided to also feature the best metric socket set in our honorable mention section.

The one that impressed us the most was the SK 94549 Metric Socket Set. The first thing you are going to notice about it, is the shine from the SuperKrome finish, which was not designed for the look, but rather because it is better protection against rust than anything else you could use. It is a relatively small set at just 49 pieces, and yet a very expensive one, so you need to be very clear if you need to buy something like this or not.

However, the good news is that this is one of the few sets that are actually made in the USA so the level of quality that goes into every set is way above anything you could have from a China-made ratchet set. It even comes with a, no holds, lifetime warranty, that can be easily fulfilled since everything is made in the States.

Finally, the entire set comes in a beautiful plastic molded case that is perfect for keeping your tools in order and well out of harms way.